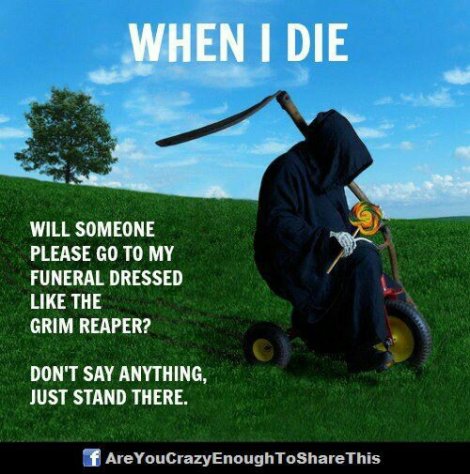 I think about death a lot, I’ve been told it’s slightly morbid. I don’t care, I think about how people would react to the news, would people jump on top of my closed casket and want to be buried with me? You know, shit like that. Just curious about it all.

What I don’t want to see is people crying their eye balls out. The majority of you fuckers, don’t even bother to check up on me now. I wasn’t important enough to be looked in on, so fuck you. Save your tears. The rest of you stop crying and nut up.

I don’t want grieving at my funeral, I don’t want people wearing black, while speaks in a hushed tone. Fuck that. I want my funeral to be a celebration, of me of course. Let the beer flow. I also want a bouncy house for the kids, maybe you throw my casket in there with them. Slightly weird, but hey it’s my day asshole.

I want a man dressed as a clown, who’s flower sprays people in the face as they walk past me. I want concealed whoopy cushions on every seat. Fart noises are funny. I want jokes to be told about me, offensive jokes. Can’t be mad now can I, so roast me. I want someone to get dressed as the Grim Reaper, not say a word, and just stand around all creepy like.

After everyone has said their piece, and it’s time for people to walk past my casket, someone will open it up and all you’ll find is a note. What’s the note say, you ask?

One response to “My Funeral”