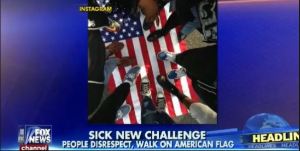 I’ve been seeing quite a few people on social media doing the flag stomp or flag burning challenge in protest to some of the things that are going on. I am completely on board with showing your anger in protest. I’m a minority in this country and there are things as of late that have really bothered me with these police shootings that keep happening. I can understand the level of anger that would push someone to the point where they may feel the need to do this. Most people who are against this form of protest generally can’t relate to the kind of hurt that one has to feel in order to do something like that.

As a second generation veteran I’m someone who loves the national anthem, saluting the flag, and defending it when needed. By no means would I desecrate it, but I don’t see myself stopping someone from doing it either. For me, it’s an inanimate object, something that may or may not even be made in America. It’s an item that’s sold in stores and anyone can purchase and once done so is theirs to do with what they want. I have no right over THAT flag, so do what you want.

At the end of the day, love it or hate it, the men and women who fought and died for the principles that that flag represents also covers the rights to do just that. It covers the right to fly the flag or burn it. Speak in it’s praise or demean it with hateful words. We fight for the rights of the inclusive loving citizen as we do for the skinhead.

So as much as it bothers me that it’s happening, they should have the right to do so. It’s the shinning example of what America is and what other countries refuse to empower their citizens with. As ugly as the act is there’s a democratic beauty to it all and I love it.