It’s been an interesting week. After way too long, America finally decided to do something about the Confederate flag being flown at government buildings. Too bad it only took a church shooting for you to pay attention. To the people who are screaming about honoring heritage and history, go fuck yourselves. Your ancestors were an insurgent force trying to rip the Union apart for the sake of keeping slaves. You’re refusal to acknowledge this is disgusting and almost comical. Now imagine if the Germans decided to keep Nazi symbols after everything they did during WWII, how would they be viewed? While I don’t think the flag is should be waved or sold at government property, I do think that racists have the right to purchase the flag if they so choose too. 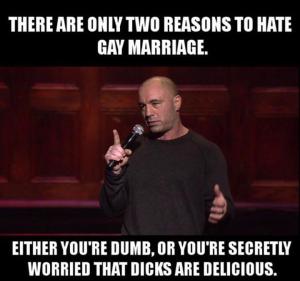 All while this was going on the Supreme Court ruled that it’s unconstitutional to ban same sex marriage and the Christian right damn near lost their minds worried about God’s wrath and how Christians are now going to be prosecuted for their beliefs. No one cares what you do within your faith. If you think it’s wrong to be gay.. well umm.. don’t be gay. Don’t take dick in the ass or start reenacting Orange Is The New Black scenes and you’ll be fine. Two things can exist at the same time. You can remain Christian AND be accepting of others. Your church doesn’t have to marry gay people if it doesn’t want to, that’s perfectly fine. Doesn’t mean that the state can’t provide the service to those who want to get married.

So in the end, are you “worried that dicks are delicious”?