First and foremost, I LOVE America. I really do. Personally I stand when the National Anthem is played and a sense of pride swells inside of me whenever I see that beautiful flag waving. I love America deeply, much like I love my family when I think about it. I say that specifically because just like with my own family, I have to hang foot in someone’s ass every once in a while.

My family and I don’t always get along. My in-laws and I definitely don’t always agree on shit. Their experiences are often much different than my own when it comes to certain situations and subjects which leads us all to put scaled priorities on some aspects of life.

As the in-law of a family you sometimes don’t feel like you’re REALLY part of the family and some of your opinions about the things that go on within the family will get disregarded for one reason or another. Some issues you brush off while others you have to speak up about, resulting in pretty heated arguments but that discourse sometimes has to take place for things to improve. With that being said I would go to war for my in-laws if it came to that because that’s family.

I bring family into this because it often feels like people of color are the in-laws in this relationship with America. We’ve been part of this family for generations and yet it feels like we’re still outsiders trying to figure out where to sit at family dinner. You expect us to take up arms when America is attacked but discard our opinion and pain with indifference and or ignorance. 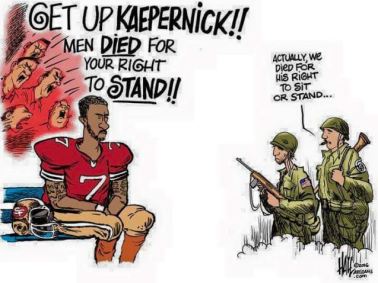 I get it. Coming to grips with the fact that the American family is just a tad fucked up hurts. It disturbs the view that you have had for so long of how awesome shit is, because for you it is.

As the in-laws in this relationship I quietly voiced my concerns about how I’ve been treated, you ignored them. You refused to listen and maybe even chastised me for feeling the way I did and which made me feel resentful. The next time this same issue occurred I raised my voice and the words I used were harsher and angrier, but still you deluded my concerns and told me I was being too sensitive so nothing changed. 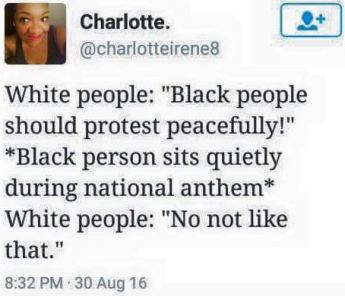 Finally we had a full on argument about all the issues I’ve been having since I became part of this family and in the process you took offense to the tone of my voice and how angry I look. Now it’s no longer about the slights and wrongs that I’ve had to endure this entire time, you’re solely focused on how I responded to them.

That in essence is what’s going on in America today. Our fears, our concerns, our pain are all being ignored and marginalized. I wish you would stop minimizing how and what we are feeling and giving us suggestions on how we should conduct ourselves when you’ve NEVER been the in-law in this relationship. Stop deflecting the issues with, well what about what’s going on in your family? While the issues within my own are readily apparent, that should not have any baring on how YOU are treating me as a member of THIS family.

The fact that I’ve seen more outrage over Colin Kaepernick peacefully kneeling during the National Anthem than I EVER saw over the Philando Castile, Walter Scott, or the Tamir Rice murders show’s a clear issue with our family. The DOJ’s reports on how several big cities police Blacks in America came and went with little significance to you but Kaepernick’s defiance is where you draw the line?